If a depressed mood accompanied by several of the following problems has been present for at least several weeks, and a careful history, physical exam, and lab tests have ruled out specific causes of depression, true primary depression is probably the diagnosis. The problems are sadness that impairs normal functioning, difficulty concentrating, low self esteem, guilt, suicidal thoughts, extreme fatigue, low energy level or agitation, sleep disturbances, and appetite disturbance with associated weight change. Since suicidal thoughts and attempts often characterize depression, the possibility of suicide using antidepressant drugs has to be kept in mind and only a small number of pills prescribed at one time. Another way of describing the pervasive nature of this kind of severe depression is that the person displays and relates if asked a sense of helplessness, hopelessness, worthlessness and uselessness as well as intense feelings of guilt over real or imagined shortcomings or indiscretions.

Although depression in older adults is usually unipolar (depression alone), occasionally there is a bipolar pattern with alternation of depression and mania. The latter shows up as an elated mood, rapid flow of ideas, and increased energy. The patient, often seeming hyperactive during this manic phase, can be intrusive, have an infectious sense of humor, and may show poor judgment in business or personal affairs, not infrequently going on spending sprees. Lithium is often used successfully to treat people with bipolar disease. Other drugs approved for treatment of bipolar depression include Zyprexa and Seroquel.

Serious depressive illness is far less frequent in the elderly. According to data from the National Institute of Mental Health, while nearly 5% of people age 23 to 40 have had a major depression recently, fewer than 3% of people 59 and over have had this misfortune. In spite of this, about one-third of antidepressants are prescribed for people 55 and over even though they make up just one-sixth of the population. Some of this apparent overtreatment may be due to failing to diagnose drug-induced depression and instead using a second drug to treat the depression caused by the first. 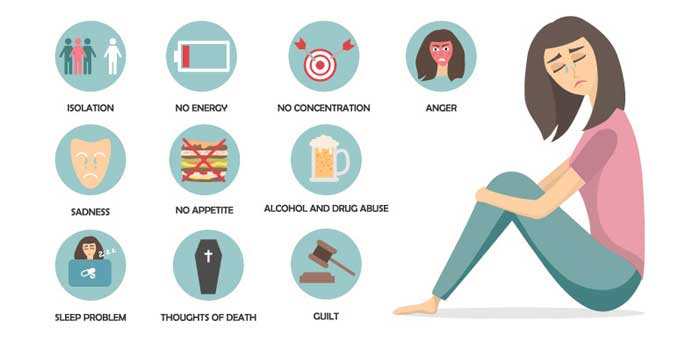 In many countries, including the United States, there has been an extraordinary increase since 1990 in the use of antidepressants, mainly the selective serotonin reuptake inhibitors such as fluoxetine (PROZAC) and paroxetine (PAXIL). This increase, more than twofold in the 1990s in the United States has been much larger than the smaller decrease in the use of older antidepressants.

A survey in the United States of almost 7,000 people between the ages of 16 and 45 found that primary care physicians were much more likely than psychiatrists to prescribe antidepressants, tranquilizers, or sleeping pills for patients who did not have mood or anxiety disorders. Primary care doctors prescribed antidepressants to 18% of people, tranquilizers to 14% of people, and sleeping pills to 11% of people without mood or anxiety disorders. Primary care physicians are less selective in their use of psychoactive medicines, perhaps because of lower sensitivity and specificity of diagnoses in primary care settings.

Ironically, one of the kinds of depression that should not be treated with drugs is depression caused by other kinds of drugs. If someone is depressed and the depression started after beginning a new drug, it may well be drug-caused. Commonly used drugs known to cause depression include the following:

The remedy for this kind of depression is to reduce the dose of the drug or stop it altogether if possible. If necessary, switch to another drug that does not cause depression. Another major cause of drug-induced depression is alcoholism, the treatment of which is difficult.

Other causes of depression that should not be treated with antidepressant drugs are the normal reactions to life problems, such as the loss of a spouse, friend, relative, or job, or other situations that normally make almost anyone sad. If the depression is clearly a response to overwhelming life crises, antidepressants have little value. Other options, such as support from family and friends, psychotherapy with a mental health professional, or a change in your environment, are worth exploring. Doing something nice for yourself, talking with a friend, and exercising every day can help you get through these difficult situations.

Older adults (or anyone) who appear depressed may have a thyroid disorder, a type of cancer such as pancreatic, bowel, brain, or lymph node (lymphoma) viral pneumonia, or hepatitis. In addition, there is evidence that people who have had a stroke or who have Parkinson's disease or Alzheimer's disease may become depressed and, in some cases, may respond to antidepressant drugs.

What Are the Best Treatments for Depression?

Everyone with the kind of severe depression described above should be evaluated by a mental health professional to determine what kind of psychotherapy would best supplement the antidepressant drugs that are going to be used. The decision as to which drug is best will depend largely on which one has the fewest adverse effects, since all antidepressants are equally effective. If depression has occurred previously and responded to one of the drugs without too many adverse effects, that would be the best one to try first. The SSRI antidepressants such as fluoxetine (PROZAC, SERAFEM), sertraline (ZOLOFT), and paroxetine (PAXIL) are promoted as having fewer adverse effects than the older tricyclic antidepressants such as amitriptyline (ELAVIL).

Most older adults who think they have a sleeping problem do not have the kind of severe depression that justifies the use of these drugs. Nevertheless, if the sleep disorder is a consequence of severe depression, the adverse effect of sedation may be useful as long as it does not produce too much sedation, with the risk of falling. This is an important consideration especially in people who already have some impairment of thinking, increased confusion, disorientation, and agitation.

If the adverse effects of whichever drug is selected are too severe, or if the drug does not seem to be working, talk to your doctor about switching to a drug less likely to cause the troublesome effects. The FDA issued a public health advisory warning, which stated that in studies of depressed adults and children being treated with antidepressants there was an increased risk of suicidal thoughts and actions. It should be noted that the only drug that has received approval in USA for use in children with major depressive disorder is fluoxetine (PROZAC). Several of these drugs are approved for the treatment of obsessive-compulsive disorder in pediatric patients, for example, sertraline, fluoxetine, and fluvoxamine.

How to Reduce the Adverse Effects of Antidepressants

It is important to realize that long-term treatment with antidepressants is not always necessary even when the drug is being used to treat the kind of serious depression for which its use is proper. In one study, after patients had been successfully treated for four months with antidepressants, half were continued on their drugs and the other half were switched to a placebo. After an additional two months, most of the patients on either the actual drug or the placebo were still doing well. Only about one-fourth, the same in both groups, had relapsed.

Start with a dose of one-third to one-half the usual adult dose at bedtime. Increase the dose very slowly. It may take three weeks to see an effect. A trial with one of these drugs, should continue until it either works or causes persistent adverse effects. Lower the dose gradually, as symptoms dictate, after successful treatment for several months.

When starting a drug for a specific depressive illness, the doctor should monitor your response carefully to see if a different dose should be used. It should be made clear to you that depression can be an episodic illness, that recovery is expected, and that the treatment will probably eventually be stopped. If treatment with drugs is started as a trial in possible depression, you should be informed that it is a trial and that treatment will continue for a specified time, depending on the response of key symptoms. The possibility of adverse effects should be evaluated carefully before these drugs are used primarily as sleeping pills or as an alternative to tranquilizers in the elderly.