The American Medical Association classified obesity as a disease. Obesity is a medical condition in which excess body fat has accumulated to the extent that it may have a negative effect on health. People are generally considered obese when their body mass index, a measurement obtained by dividing a person's weight by the square of the person's height, is over 30 kg/m2, with the range 25 - 30 kg/m2 defined as overweight. Some East Asian countries use lower values. Obesity increases the likelihood of various diseases and conditions, particularly cardiovascular diseases, type 2 diabetes, obstructive sleep apnea, certain types of cancer, osteoarthritis and depression.

Obesity is most commonly caused by a combination of excessive food intake, lack of physical activity, and genetic susceptibility. A few cases are caused primarily by genes, endocrine disorders, medications, or mental disorder. The view that obese people eat little yet gain weight due to a slow metabolism is not generally supported. On average, obese people have a greater energy expenditure than their normal counterparts due to the energy required to maintain an increased body mass.

Obesity is mostly preventable through a combination of social changes and personal choices. Changes to diet and exercising are the main treatments. Diet quality can be improved by reducing the consumption of energy-dense foods, such as those high in fat and sugars, and by increasing the intake of dietary fiber. Medications may be used, along with a suitable diet, to reduce appetite or decrease fat absorption. If diet, exercise, and medication are not effective, a gastric balloon or surgery may be performed to reduce stomach volume or length of the intestines, leading to feeling full earlier or a reduced ability to absorb nutrients from food.

Obesity is a leading preventable cause of death worldwide, with increasing rates in adults and children. In 2015, 600 million adults (12%) and 100 million children were obese. Obesity is more common in women than men. Authorities view it as one of the most serious public health problems of the 21st century. Obesity is stigmatized in much of the modern world (particularly in the Western world), though it was seen as a symbol of wealth and fertility at other times in history and still is in some parts of the world.

The Adult Obesity Prevalence Maps for all 50 states, the District of Columbia, and US territories are releases each year. The maps show self-reported adult obesity prevalence by race, ethnicity, and location. The data comes from the Behavioral Risk Factor Surveillance System, an on-going state-based, telephone interview survey. The maps show that obesity impacts some groups more than others. There are notable differences by race and ethnicity, as shown by combined data from last years:

Obesty By Education and Age

Obesty Across States and Territories

Prevalence of Self-Reported Obesity Among U.S. Adults by State and Territory. 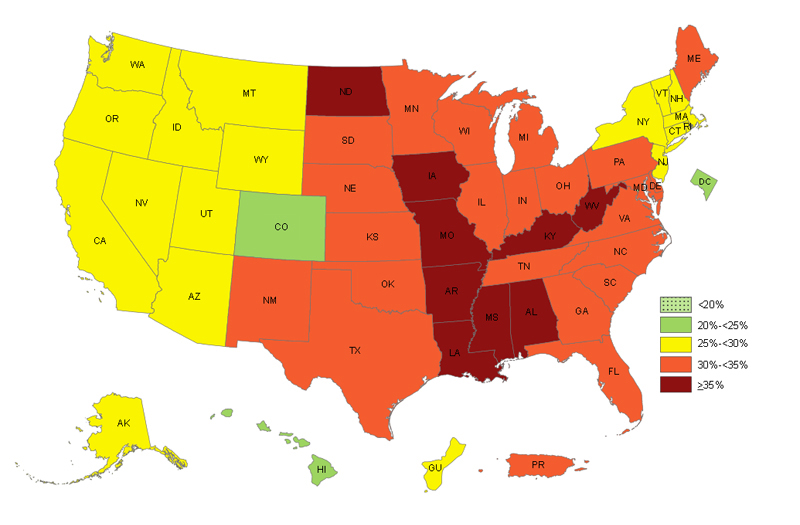 Obesity is a complex disease involving an excessive amount of body fat. Obesity isn't just a cosmetic concern. It is a medical problem that increases your risk of other diseases and health problems, such as heart disease, diabetes, high blood pressure and certain cancers.

There are many reasons why some people have difficulty avoiding obesity. Usually, obesity results from a combination of inherited factors, combined with the environment and personal diet and exercise choices.

Overweight and obesity are defined as abnormal or excessive fat accumulation that presents a risk to health. A crude population measure of obesity is the body mass index (BMI), a person’s weight (in kilograms) divided by the square of his or her height (in metres). A person with a BMI of 30 or more is generally considered obese. A person with a BMI equal to or more than 25 is considered overweight.

The good news is that even modest weight loss can improve or prevent the health problems associated with obesity. Dietary changes, increased physical activity and behavior changes can help you lose weight. Prescription medications like Xenical (Orlistat) and weight-loss procedures are additional options for treating obesity.