Cold sores — sometimes referred to as fever blisters, oral herpes or herpes labialis — can be painful and embarrassing. They are caused by a contagious virus called herpes simplex.

The most common herpes viruses are herpes simplex virus 1 (HSV-1) and herpes simplex virus 2 (HSV-2). Typically, HSV-1 causes cold sores or fever blisters around the lips, and HSV-2 causes genital herpes. But both herpes viruses can cause infections in either area. Once a person is infected with HSV, the virus remains dormant in nerve cells in the skin and can reactivate, causing recurrent cold sores at unpredictable intervals.

Cold sores are caused by a contagious virus called herpes simplex. Some people show no symptoms from cold sores, but others develop blisters on the face that last for a week or more. While there is no cure for cold sores, medicines can relieve some of the pain and discomfort associated with the infection. These include topical products that numb the blisters, antibiotics that control secondary bacterial infections and ointments that soften the crusts of the sores. 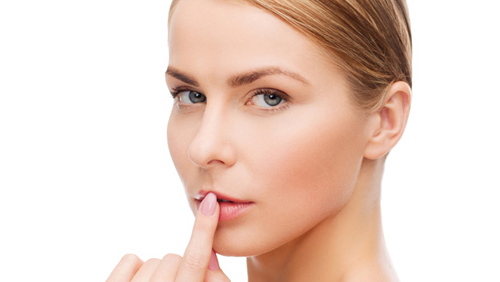 Cold sores often are preceded by burning, itching, tingling or numbness in the area where the cold sore is developing. A mature cold sore often has a crust overlying a red, inflamed area. The live virus can be transmitted from person to person by direct contact, even by an infected person who does not have cold sores. In most people with normal immune systems, cold sores are a mild condition and heal on their own within several days; they are primarily a cosmetic problem.

The Food and Drug Administration (FDA) has approved five antiviral drugs to treat recurrent cold sores. These drugs have been proven to minimally shorten the duration of, but not to cure, HSV infections.

Two large clinical trials tested acyclovir cream in subjects with frequent cold sores. Subjects applied either acyclovir or placebo cream within an hour of symptom onset and then five times a day for four days. Both trials showed that acyclovir cream decreased the average duration of cold sores by half a day only compared with placebo (4.5 versus 5 days, respectively).

In 2009, the FDA approved a combination topical cream containing acyclovir and the corticosteroid hydrocortisone under the brand name Xerese for treatment of cold sores. A clinical trial of this product, which is applied five times per day for five days, showed that the subjects receiving the active drug experienced complete healing 1.6 days sooner and were less likely to develop an ulcerated cold sore.

In 2013, that agency approved a tablet form of acyclovir under the brand name Sitavig for treatment of cold sores. This drug, which is placed between the gum and lip and taken once, shortened the average duration of cold sores by half a day compared with a placebo.

The most common adverse effects of topical acyclovir include skin and lip dryness, cracking, burning, itching and stinging.

The oral drug valacyclovir was approved by the FDA in 2002 for the one-day treatment of cold sores. The drug had previously been approved for the suppression and treatment of genital herpes and the treatment of shingles. Valacyclovir is rapidly converted in the body into acyclovir.

The 2002 approval was based on two large clinical trials that enrolled healthy adults and adolescents (12 years of age or older) with recurrent cold sores. Patients self-initiated treatment at the earliest symptoms and prior to any signs of a cold sore, usually within two hours of symptoms occurring. The average duration of cold sore episodes was about one day shorter in subjects receiving valacyclovir than in those receiving a placebo. Gastrointestinal adverse effects, headache and rash were seen in clinical trials with the drug.

Penciclovir is a prescription topical cream that was approved by the FDA in 1996 for treatment of cold sores.

Adverse effects reported with penciclovir include swelling, pain, itching and redness at the application site; headache; and swelling in the mouth and throat.

Docosanol is an over-the-counter topical cream approved by the FDA in 2000 for treatment of cold sores. Upon examining the FDA’s review of the drug, we found it surprising that it was ever approved. Three clinical trials failed to show a statistically significant difference in cold sore healing time for docosanol compared with placebo. In two of these trials, the cold sore healing time was slightly faster with placebo than with docosanol by a few hours. The third trial found that subjects receiving docosanol had cold sores resolve less than five hours faster than those receiving a placebo. The FDA medical officer and statisticians repeatedly recommended against the drug’s approval.

The manufacturer of docosanol later submitted data from additional studies to the FDA and, after some dispute, was able to convince the agency that two clinical trials yielded positive results in favor of docosanol over placebo.

The oral drug famciclovir was approved by the FDA in 1994 under the brand name FAMVIR for the treatment of certain herpes infections and is currently only available in generic form. It was later approved in 2006 for single-dose treatment of cold sores. That approval was based on a single clinical trial in adult subjects with recurrent cold sores. Subjects who took famciclovir experienced a reduced median healing time by nearly two days and faster pain relief by over one day as compared with subjects who took a placebo.

Timing is important when using these drugs. For instance, there is no evidence that the oral drug valacyclovir (VALTREX) will work when taken after a cold sore appears. The FDA requires the label for this drug to state that: "The efficacy of VALTREX initiated after the development of clinical signs of a cold sore (e.g., papule, vesicle, or ulcer) has not been established." Patients who do not wish to use medications to treat cold sores can take some simple steps to control discomfort, allow healing and avoid complications.

If you have a cold sore, there are steps you can take to control discomfort, allow healing and avoid complications. The cold sore should be kept moist to prevent drying and cracking, which may allow bacterial infection to develop, thus delaying healing. Skin protectors such as petroleum jelly (VASELINE) will relieve dryness and keep the sores soft. Applying local pain relievers (anesthetics) containing drugs such as benzocaine can reduce discomfort. The cold sore should also be kept clean by gently washing with soap and water.

If you decide to use an FDA-approved antiviral drug for recurrent cold sores, oral famciclovir and topical acyclovir with hydrocortisone appear to offer the most benefit.

Table with Products Currently Approved in the U.S. for Treatment of Cold Sores.


Does Everyone Have Herpes?

It really depends on what patients feel the most comfortable with and how many outbreaks someone has in a year. If someone has more than five or six outbreaks a year, it's generally recommended that they take antivirals daily as a suppressive treatment. Herpes is an incredibly common yet misunderstood virus. In the United States, around one in two people have oral herpes, and more than one in six people have genital herpes.

While there is no cure for herpes, there are several different options when it comes to managing the virus. While some people treat herpes with natural remedies such tea tree oil, or coconut oil, these treatments haven’t been medically studied over the long-term. Most effective use antiviral medications such as valacyclovir (Valtrex), because they decrease the viral shedding, the length of the outbreak, the pain that comes with the outbreak, and they have a tendency to speed up the healing. People can take antivirals either as episodic treatment, meaning that they’re taken at the first sign of an outbreak to shorten the length, or as suppressive therapy, meaning they’re taken daily to prevent outbreaks and decrease the risk of transmission.