Parasites are living things that use other living things, such as your body, for food and shelter. You can get them through contaminated food or water, insect bites, or sexual contact. Some parasitic diseases are easy to treat and some are not. Parasites range in size from tiny, single-celled organisms called protozoa to worms that can be seen with the naked eye. Several parasitic diseases are found in the United States. Contaminated water can lead to Giardia infestation. Cats can carry toxoplasmosis, which is dangerous for pregnant women. Others, such as malaria, are common in other parts of the world. When traveling, it is important to drink only safe water. Prevention is especially important. There is no vaccine against parasitic diseases. Several medications are available to treat parasitic infections.

Parasitic infections cause an enormous burden of disease in both the tropics and subtropics and in more temperate climates. Of all parasitic diseases, malaria causes the largest number of deaths worldwide. Malaria kills more than 400,000 people every year, most of them children in sub-Saharan Africa. Neglected tropical diseases that have not received adequate public health attention include parasitic diseases such as lymphatic filariasis, onchocerciasis and dracunculiasis disease. Neglected tropical diseases affect more than 1 billion people worldwide, mostly in rural areas of low-income countries. These diseases take a heavy toll on endemic populations, including the loss of the ability to go to school or work, stunted growth in children, impairment of cognitive skills and development in young children, and severe economic burdens on entire countries. However, parasitic infections also affect people living in developed countries, including the United States.

A parasitic disease, also known as parasitosis, is an infectious disease caused or transmitted by a parasite. Many parasites do not cause diseases as it may eventually lead to death of both organism and host. Parasites infecting human beings are called human parasites. Parasitic diseases can affect practically all living organisms, including plants and mammals. The study of parasitic diseases is called parasitology. A parasite is an organism that lives on or in a host organism and gets its food from or at the expense of its host.

US residents are believed to suffer less from parasitic infections due to better nutrition, shelter, hygiene, and clean water. The United States is also somewhat geographically isolated from the rest of the world, and its climate, especially in the northern part of the country, is also likely to be protective. Affected US residents are usually associated with travel to tropical areas, recent US immigration, or direct contact with new immigrants. Sometimes infections are caused by local parasites, especially as a result of improper cooking or direct contact with pets or farm animals.

There are three main classes of parasites that can cause disease in humans: protozoa, helminths, and ectoparasites. 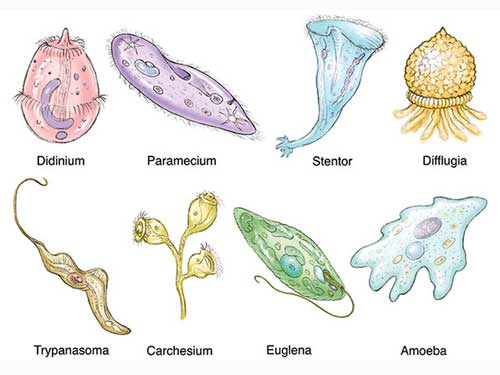 Protozoa are microscopic unicellular organisms that can be free-living or parasitic in nature. They are able to reproduce in humans, which promotes their survival, and also allows serious infections to develop in only one organism. Transmission of protozoa that live in the human intestine to another person usually occurs through the fecal-oral route (for example, through contaminated food or water, or through person-to-person contact). Protozoa that live in human blood or tissues are transmitted to other people through arthropod vectors (for example, through the bite of a mosquito or sand fly). 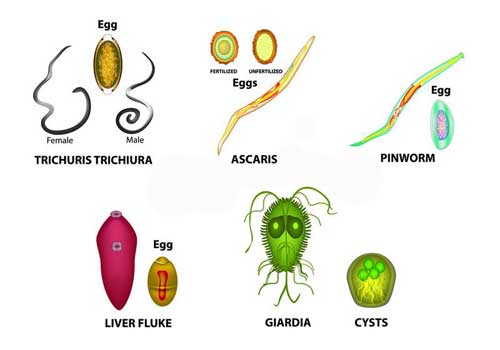 Helminths are large, multicellular organisms that are usually visible to the naked eye during their adult stages. Like protozoa, helminths can be free-living or parasitic in nature. In their adult form, helminths cannot reproduce in humans. There are three main groups of helminths (derived from the Greek word for "worms"), which are human parasites: 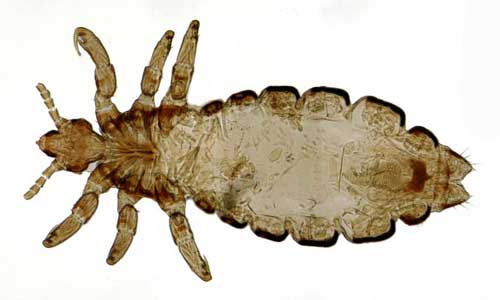 Although the term ectoparasites can broadly include blood-sucking arthropods such as mosquitoes (since their survival depends on the intake of blood from the host), the term is usually used in a narrower sense to refer to organisms such as ticks, fleas, and lice. and mites that attach to or burrow into the skin and remain there for relatively long periods of time (eg, weeks to months). Arthropods themselves play an important role in disease initiation, but are even more important as carriers or carriers of many different pathogens, which in turn cause tremendous morbidity and mortality from the diseases they cause.

Mammals can become infected with parasites through contaminated food or water, insect bites, or sexual contact. Swallowing contaminated water can cause giardiasis. Parasites usually enter the body through the skin or mouth. Close contact with pets can lead to parasite infestation, as dogs and cats are the host of many parasites. Other risks that can lead to human parasite infestation include walking barefoot, improperly disposing of faeces, poor hygiene practices, close contact with someone carrying certain parasites, and eating inadequately cooked foods, unwashed fruits and vegetables, or foods made from contaminated regions. Parasites can also be transmitted to their host by the bite of insect vectors, that is, mosquitoes, bed bugs, fleas.

Disease-causing parasites have long afflicted the human population. For example, calcified helminth eggs were recovered from Egyptian mummies dating from around 1200 BC, and written records indicate that ancient Greek and Roman doctors treated patients with a variety of hookworm infections, including tapeworm infections. From the 17th to the 20th century, with the discovery and classification of numerous parasites, an awareness of the global burden of parasites came. Indeed, more than 3 billion people worldwide are infected with intestinal parasites or protozoa, and parasitic diseases are one of the leading causes of death in people worldwide. Epidemiological studies show that many factors influence the risk of human infection and the spread of parasitic diseases, including the pathogenicity of the parasites, the health of the host, the environment and social conditions.

The symptoms of parasites may not always be obvious. However, these symptoms can mimic anemia or hormone deficiency. Some of the symptoms caused by multiple worm infestations may include itching affecting the anus or vaginal area, abdominal pain, weight loss, increased appetite, bowel obstruction, diarrhea and vomiting, which ultimately leads to dehydration, sleep problems, and worms in vomiting or vomiting, stools, anemia, muscle or joint pain, general malaise, allergies, fatigue and nervousness. Symptoms can also be confused with pneumonia or food poisoning. The effects of parasitic diseases range from mild discomfort to death. The nematode parasites Necator americanus and Ancylostoma duodenale cause hookworm infection in humans, which leads to anemia, protein deficiency and, in severely malnourished people, shortness of breath and weakness. This infection affects an estimated 740 million people in developing countries, including children and adults, in the tropics, especially in poor rural areas of sub-Saharan Africa, Latin America, Southeast Asia and China. Chronic hookworm disease in children leads to impaired physical and intellectual development, reduced academic performance and attendance. Pregnant women who are infected with hookworms can also develop anemia, with negative consequences for both the mother and the baby. Some of them are: low birth weight, impaired milk production, and an increased risk of mother and child death.

All parasites have a life cycle that involves a period of time spent in a host organism and that can be divided into phases of growth, reproduction, and transmission. Life cycles of parasites can be further divided into two categories: direct (monoxenous) and indirect (heteroxenous). Parasites with direct life cycles spend most of their adult lives in one host, known as the parasitic stage, with their progeny transmitted from one host to another, known as the free-living stage. Direct parasites often lack an intermediate stage and must leave their host. To do this, they must be able to survive in an environment outside their original host and then locate and establish in a new host. Parasites that depend on the host stage are called obligate parasites, whereas parasites that can skip the parasitic stage for several generations are called facultative parasites. Nematodes, trypanosomatids, and Cryptosporidium are examples of parasites with direct life cycles. Parasites with indirect life cycles are characterized by two host stages, which require a definitive host and an intermediate host. The definitive host stage is required for reproduction and the adult life phase. Within the intermediate host, parasite development occurs, after which it can be transmitted to a definitive host. Multiple developmental stages may take place in an intermediate host, which plays an important role in facilitating disease transmission in the form of vectors, such as mosquitoes, which pass immature parasites through their proboscis directly into the bloodstream of the definitive host. Some filarial nematodes, Plasmodium, and Leishmania are examples of parasites with indirect life cycles. Reservoir hosts typically tolerate parasites with no ill effects; however, the introduction of a new host into a population of reservoir hosts will often result in severe disease in the newly introduced host.

Antiparasitic drugs can be divided into antiprotozoal agents and antihelminthic agents. Antiprotozoals are typically designed to be effective in disrupting a specific stage in a parasite life cycle. Drugs against Plasmodium can be taken as prophylactics, as in the case of oral chloroquine, or as treatment for active disease, as in the case of combination drug therapy using atovaquone and proguanil, artemether and lumefantrine, or quinine sulfate and doxycycline. Other commonly used antiprotozoal drugs include metronidazole, amphotericin B, and suramin.

Antihelminthic drugs cause physical damage to parasitic worms, in most cases targeting adult worms. They also inhibit parasite metabolism, inhibit the ability of parasites to lay eggs, or facilitate parasite excretion from the host. The class of benzimidazole antihelminthics, which includes mebendazole and albendazole, interferes with glucose uptake and energy production by the parasite. These drugs are used as first line therapy for most roundworm and some tapeworm infections.

Some drugs used to treat parasitic diseases are not licensed by the U.S. Food and Drug Administration for sale in this United States since their demand in this country is so low and seeking approval is not cost effective for the drug manufacturers. However, to allow treatment of patients with an unlicensed drug product, FDA may permit the use of a drug or biological product under an Investigational New Drug application. An IND application includes a protocol for the clinical use of the unlicensed drug and must be submitted for review to FDA and permitted to proceed before any agents are released under IND status. CDC maintains protocols with IND status for some drugs to ensure that they are available in the United States when needed.

Stromectol: Stromectol (Ivermectin) is one of the more frequently used antiparasitic drugs in the U.S., but not for the most impactful parasitic infections. Like other agents, Stromectol paralyzes certain helminths, but its molecular mechanism of action is different. Stromectol intensifies GABA-mediated transmission, which causes postsynaptic neuron hyperpolarization in susceptible helminths. Taking Stromectol with food (specifically, a high-fat meal) greatly increases bioavailability. Ivermectin is usually given as a single dose. However, when treating filariasis, a single dose is effective in reducing symptoms for many months but rarely induces remission. Repeat doses may be needed once or twice yearly for several years until the infection eventually subsides.

Unsanitary conditions are often the underlying cause of parasitic disease, especially in areas that are overpopulated or have poor water quality, or among populations that lack knowledge of parasites. Thus, following simple sanitation procedures, such as washing hands, cooking meat, and keeping human waste separate from humans, food supplies, pets, and livestock can prevent many diseases caused by parasites. While highly effective in preventing parasitic diseases, sanitation can be difficult in areas where there are no financial or administrative resources to meet basic needs such as clean water supplies. In some cultures, people maintain intimate dwellings with their livestock and coexisting parasites, which greatly increases the risk of parasitic diseases. Moreover, parasitic diseases can be sustained indefinitely in human populations that do not have access to medical care to break the cycle of parasitic infection.